Work, Living and Environmental Conditions: Impacts on the Health and Well-being of Long-term and First - generation Rural Migrant Workers in China. 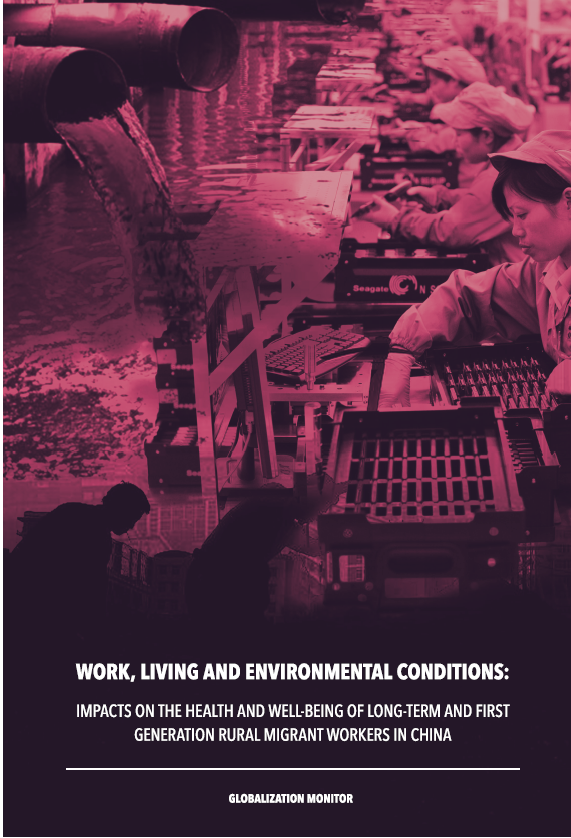 China’s internal rural migrant workers have been the cornerstone of China’s economic growth since the commencement of reform. Hundreds of millions of workers have migrated to the cities in search of work since the 1980s following China first initiating its reform and open policy, often to support their families back home in rural areas. As their numbers grew rapidly and the earlier generation was followed into the cities by new generations (born from the 1980s onwards), these workers became a pool of cheap labour and the driving force of China’s economic growth and rise since then. During the first decade of the twenty-first century the number of migrants moving from rural to urban areas each year averaged more than 15 million (Mou, Griffiths, Fong and Dawes 2013). By 2018 there were more than 288 million migrant workers in China (NBS 2018).

Denied the same rights and recognition as workers from urban areas, rural migrant workers have often faced discrimination and even more intensive exploitation than their urban counterparts. Nevertheless, as migrant workers have gained more experiences and awareness of their rights has grown over time, this has meant that they have become more likely to take action to try to defend their rights and interests. Although still highly exploited, these struggles have contributed to improvement to the economic and social situation for many migrant workers. Subsequently, an evolution in the aspirations and demands, particularly of the younger generations, has been observed. Meanwhile, China’s migrant workers are aging. According to official statistics, in 2018 the average age of a migrant worker was 40.2 years. The proportion of migrant workers aged over 50 has also been increasing each year (NBS 2019). Following a lifetime of work and exploitation, the first generation of older migrant workers are now facing new challenges of their own as they have reached or are approaching retirement age.

Moreover, in addition to labour issues such as pay, welfare and a lack of adequate labour rights that have impacted on the lives of migrant workers, adverse environmental factors (often as a result of exposure to industrial pollutants) also affect many workers and their families both at home and in the workplace. China’s economic growth has resulted in immense environmental damage, which has in many instances put human health significantly at risk, for instance through water or food contamination and air pollution and exposure to harmful chemicals released into the environment. Indeed, with many workers coming into contact with toxic and highly polluting substances during production line work, many workers face a double risk at work and in their daily lives. In this sense, labour and environmental issues impacting on the lives of workers are closely connected.

This report looks at the lives of China’s first generation and long term internal migrant workers, and the impacts of their work and living situation on their well-being as many of them approach retirement age. It not only takes into account their wages and traditional labour rights issues, along with the workers’ position as rural to urban migrants and associated implications, but also how these workers might experience the effects of pollution that has grown along with China industrial development and economic growth. The report largely draws on a survey of 651 migrant workers from five cities in China, which allowed for workers to provide details about their situation but also to express their views and opinions concerning some of these issues that significantly shape their lives.